Walther Farms is a 3rd generation family owned business headquartered in Three Rivers, Michigan. Beginning in the 1940’s, our company expanded from a few vegetable acres of backyard hobby farming, to what has now become over 18,000 acres of commercial and seed potatoes grown throughout the United States for the potato chip and fresh produce markets.

Walther Farms was started by Leonard Walther Sr. and his wife Regina, otherwise known as Grandma and Grandpa, in 1946 in Clio, Michigan. Grandpa worked at the Buick engine plant in nearby Flint. The farm eventually shifted to potato production and has been supplying potato chip processors for more than 40 years. Starting in the early 2000s, the farm began growing potatoes for the table stock market, and has steadily increased annual production in this segment year after year.

Their four sons, the 2nd generation, helped the operation grow. Bob, Tom, Darrell and Leonard are now retired but enjoy coming by to see how the farm is changing. They also sometimes help “the boys” during planting and harvest seasons.

Today, Walther Farms has over 150 team members involved including nine 3rd generation family members and some 4th generation members emerging. We maintain a family culture with a professional approach to business. 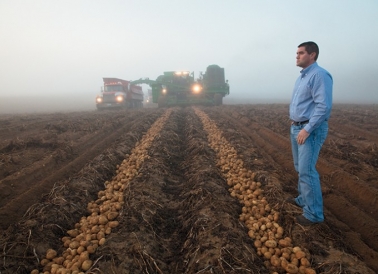