Iott Seed Farms has family farming roots that go back more than 100 years. The family first started farming in Monroe County, located in southeast Michigan, in the late 1800’s. Brothers Ralph and Jim Iott farmed together in the same area after Ralph graduated from high school in 1953. The farm originally included several varieties of vegetables and canning tomatoes before adding chipping potatoes in the early ’60s. By the early ’70s, the type of land needed for reliable potato production was getting scarce in southern Michigan, so Ralph and Jim began scouting for potato land in beautiful northern Michigan.

In 1974, they purchased the first 500 acres of what would eventually become Iott Seed Farms in Kalkaska. For several years, they – mostly Ralph – “commuted” 250 miles during planting and harvest season while Dennis (Ralph’s oldest son) and several friends and cousins stayed in Kalkaska to take care of the farm during the summer. The first several years of potato production in Kalkaska were for the Frito Lay chip plant in Allen Park.
For several years after Ralph’s move north, the farm focused on chip varieties for seed, including Frito Lay seed, and processing potatoes for the two French fry plants in Michigan. In 1997, the last fry plant closed, which left the farm at a crossroads. The farm needed to add revenue or cut expenses in a serious way. That’s when the transition to becoming a full-time seed producer took place.

With an eye on the future, Greg and Dennis recruited nephew Bryan Fischer in 2012.  He and his wife Amber, along with their children Kaden and Abbey, moved to Kalkaska in August 2012. A third child, Lucas, joined the family in 2015. Bryan had many summers of experience on the farm prior to joining Iott Seed Farms full-time. He has been on a fast leadership track and will be a key contributor as the farm continues to grow. 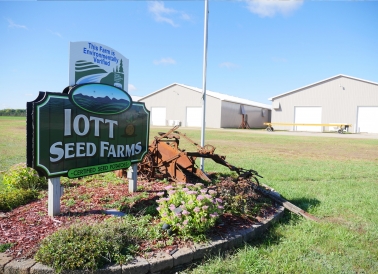